So a new movie review was supposed to go up on Dec 31st to close out the year, but I’ve hit some massive snags with YouTube’s copyright ID system. I’m assuming it’s because I decided to talk about a well known film rather than something obscure, but it’s been a real pain. So much so that I actually think the video will end up on moose2 rather than my main channel, even though it’s main channel quality. Kind of a bummer, but at this point I just want the video out so that people can watch it. Expect it this weekend! I think it’s one of my best media reviews in a while, actually.

After that, I’ll have another main channel video on the 15th. No extra details to provide here, but I think it’ll be a real crowd pleaser.

That’s all the updates for now! I haven’t streamed in a little bit but I think once I get this Jan15th video done I should have some room. I’m not sure if we’ll do Polar Express this year, I honestly think that I might finally be done with our good boy Heraldo. I feel like we should start a new tradition with Christmas 2022, because I’ve come to kind of dread this one. It’s just not a very fun game lmfao

Hope everyone had a great christmas and new years! Santa brought me an Elgato green screen this year and I’m freakin’ pumped for you to never see it (because it will be keyed out). I’m feeling super good about 2022, I actually feel like I’ve got my brain in the right place to make some top-notch stuff.

Also, big thanks to everyone who gave me vlog topics on my last post! I’ll be using them soon so I can post something besides project updates, because i’m trying to work on keeping my lips zipped.

You guys do anything wild over the holidays? I took 2 whole days off. It was pretty insane.

Hey ian, thanks for the update! Loved your arcade video, its making me want to go out to an arcade. A Round One took over the Sears in the mall nearby, so I think I am going to check that out soon! The holiday for me kinda sucked, my wife and I got sick and stayed in our whole week off. In the New Year though, I started planning out a game I’m working on in Unity, a project I hope to finish by the end of the year. We will see. Looking forward to the new stuff as always!… Read more »

Is the Big video still in the works? Is it a review of the movie Big starring Tom Hanks? Is the new show still coming? It would be neat to learn about cancelled videos and backburner videos.

Glad to know YouTube’s copyright ID system is still a pain in the ass! :’)
Looking forward to your new uploads, no matter the channel!

I think some content creators could benefit from longer vacations.
I personally got a week off for the holidays and spent it indoors, mostly porting the Televoid fan game to the Godot game engine. 👀

I feel you on the Polar Express burnout. It probably wouldn’t be such a drag if it was a better game, but alas and alack it is not lol. If you’re looking for replacements that still hold a bit of a holiday vibe, anything with snow somewhere in it might work (it’d give lots of wiggle room to pick and choose at the very least).

As for presents, I got a 3D printed yarn bowl that looks like a cat~ 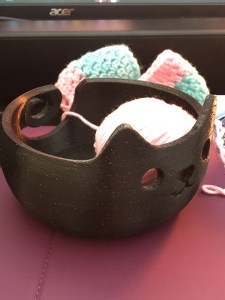 Thanks for updating us, Ian! I’ve been (obsessively) checking your channel in hopes that I will see the new vid, so I’m glad to have a bit more solid expectation about when it will arrive.

I’m also glad you took a whole two day vacation, you madman. It might be hard to believe, but some people actually arrange to have that every week! Shocking, I know. Something called a weekend.

OMG! Two days off? I can’t wait to see all the super special effects and new ideas that have been rolling around in your head.I had great Christmas,a few new Switch games and other nice gifts.I hope in the future we hear about your previous jobs with adventures stories .We have A Round One here in NJ, hopefully I will get to explore it soon.HUgs toyou MJand everyone.

Glad, to hear from you Ian. By the way, are you going to stream Ripper. Also Also I think that it’s a good idea to not stream polar express anymore, judging from the comments on this post.

BrutalMoose content may not be plentiful but it’s always quality. So much to see even as a longtime fan. I just started the Shenmue 2 playthrough and it makes my night every time. I savor it because it’s so good. I’d really keep this in mind whenever you get worn down by the grind of putting out videos: Their shelflife is much longer than other channels that operate as content mills.

So excited for it!! Dude I hope you have time to rest and take a few days off soon!! Happy new year 🙂

Super excited moose!
Just so you know, the new video alert went out to my husband’s account but not mine, and when i went to your page, it wasn’t listed. Maybe this will fix itself soon, but just wanted to mention. Gonna watch it after work and I’m stoked.
Happy 202w

Im so glad to hear that you’re feeling good about this year! Looking forward to sharing some laughs (:

First of all, thank you for the great content in 2021, Ian. You made my year a lot happier. Hoping 2022 will be even better! As for streams, are there any Nancy Drew’s games that you haven’t played yet? I’d really love to see you back in Nancy’s shoes…

The new video was amazing. I’ve never seen Twilight and this would be the only way I would enjoy a piece of media like that.
Always love everything you post, can’t wait to see you stream again (whenever you plan to ✌️)

loved the new twilight video! the energy you and luke have isa great . your vibes really do mesh well together. the edititng is top notch as always! even if the bella speaking part was just so bad

the video was great! never thought i’d actually be able to enjoy something twilight related yet you managed to prove me wrong. kudos to you!

I just heard of this insane looking ’90s FMV adventure comedy game called I’m Your Man and now I want a BrutalMoose stream of it. I miss the Cyberswine-type streams where you play some random game I never even heard of. You can check out I’m Your Man here (it’s a version converted for DVDs in the video): https://www.youtube.com/watch?v=PSVAh_zRgNU

You made me want to watch the Twilight series. I don’t know if that’s a good thing?

Also, today’s video was great. I’m glad to know that you have positive vives about this year. That gives me a little more hope for the future in a weird but nice kind of way (which is much needed)!

In any case, thank you for your content (as always!). Your uploads are like little traces of light and you always make my day. Take care!

I know you probably get this a lot but I’m still genuinely curious why telavoid was canceled, it’s been along time since you’ve talked about it and I don’t know if the reason why you’re being silent about it is because you want to continue it maybe in the future ldk man I just want any answer at all

Hey Ian! I used to watch your videos all the time when I was about 12, but stopped at around 2015. I’m going through your backlog of all your videos and it brings me a lot of nostalgia and I really appreciate the work you do. Unrelated, I can tell you enjoy point and click adventure games, and if you’re ever looking for some new ones there were two spongebob ones I used to play as a kid (spongebob: employee of the month, and spongebob: lights camera pants for pc). I don’t know how often you play games nowadays but… Read more »